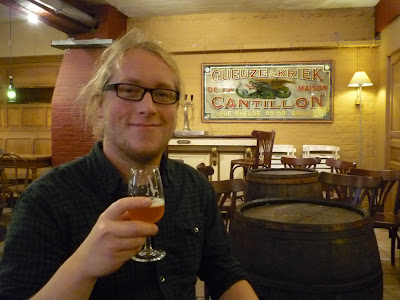 Belgium almost feels like a second home to us; in our minds it is forever the home of beer and punk rock, so it's no wonder we keep finding ourselves in this small and oft-dismissed country. Visits to Belgium bookended the time we spent back on home soil earlier in the year; in February we headed straight for Bruges Beer Festival upon touching down in continental Europe after over a year away. Never mind seeing the family! Although in my defence we met my sister, along with a bunch of other people we had dearly missed. Just to top things off it snowed upon arrival, the perfect antidote to a 40+ Australian summer, turning Bruges into a magical Christmas postcard scene. Pretty much the perfect trip!


This time we were making our regular pilgrimage to Groezrock festival before catching our flight to New Zealand. There's nothing particularly Belgian about the festival (apart from a few mainstream beers) and most of the bands are American. Belgium just happens to be conveniently placed to bring together all the punk rockers from across the continent!

We decided to spend a couple of days either side of the festival taking in the cultural delights Belgium has to offer. I'm not being sarcastic when I say it's up there as one my favourite countries in the world, and what's not to like? Antwerp is a fantastic city, full of history and culture. Ghent and Bruges are a pretty picture, and that's even before you get to the quality of the beer and the twice-fried chips! Sure between these places it's mostly flat and industrial, but nowhere's perfect. We thought we should give Brussels a second chance as we didn't think much of it the first time we visited, it seemed like a pretty grey, work-a-day city. I still can't say it's one of my favourite cities but we did a bit more sight-seeing and there's plenty going on.

The highlight of our sightseeing was a visit to Cantillon, an old family-run brewery dating back to 1900. It's still thriving and remains independent, unusual for a small brewery in Belgium these days. It only brews around 1700 hectolitres a year, which sounds like quite a lot but let's put things into perspective; the Stella Artois beer mega-factory in Leuven produces 8.6m hectolitres each year, over 5000 times more. Production was upped to their highest levels ever, 2500 hectolitres, during the 1958 Brussels World's Fair - we had visited the amazing Atomium earlier in the day, the iconic monument built for the fair is now a Brussels landmark.

After getting a bit lost we eventually found the brewery in a slighty seedy area of the city. It's a very unassuming place hidden away on a normal Brussel's street, (looking at Street View 'Brasserie Cantillon' is daubed on the building in big letters but it was obscured by scaffolding when we visited!). It's the kind of place which is a pilgramage site for beer lovers, and isn't big enough for the tour bus crowds, so as such I imagine it doesn't really need to advertise itself much. We got the attention of a member of staff going about their daily business, and were given a quick introductory speech before being handed a guidebook and being ushered off to explorer the brewery on our own.

Cantillon make lambic beer, brewed by spontaneous fermentation with wild yeasts. Before science came along and figured out how and why fermentation occured so that brewers were able to exert control over the yeast, beer would be left in the open air to pick up wild yeast to feast on the sugary wort, making it alcoholic. Cantillon's beer is made with around three times as many hops compared to other Belgian beers, mainly because it is a natural preservative. Although this doesn't mean the beer is a hophead's dream, aged hops of over three years old are used to impart less bitterness but maximise preservation, very important given that the beer isn't particularly strong (5%) and is typically matured for a few years before drinking.

They only brew for 5 months of the year from late October to early April, so there was very little going on apart from in the bottling area. The reason they only brew in the winter is because the beer is still made in a very traditional way, with very little modern technology. The wort (the boiled ingredients of the beer before it has fermented) needs to be cooled to 18-20 degrees celcius, this happens in a shallow cooling tun in the rafters of the building. Up here there are vents which can be opened to let the cold air in (this can only be done on winter's night), and let the wild yeasts come in on the wind. Legend has it that this is only possible in the Senne River valley area of Brussels - although scientifically this has obviously been disproved, but presumably the specific strains of yeast picked up could be unique to the area. Until 1860 all beer was brewed by spontaneous fermentation, as yeast was an unknown quantity, whereas now it is scientifically cultivated to produce various styles of beer, and only lambic beers are still made by this method.

The beer is matured in old wine barrels, or occasionally cognac casks. For the first few days after being filled the casks cannot be sealed otherwise they risk exploding, so alive is the beer. It is then matured for a number of years. In a 500 litre barrel only about 320 litres ends up being sellable. This is due to wastage during the initial fermentation, reduction in volume while maturing and presumably they can't use dregs in the bottom as it isn't filtered. The main style of beer that Cantillon makes is actually a blend of 1, 2 and 3 year old lambics known as gueuze. Fruit varieties are also made. After the beer has fermented for 2 years cherries, raspberries, grapes or apricots are soaked in the beer. This process takes place in summer, as you can imagine all that sticky-sweet beer-soaked fruit attracts a lot of insects. This represents a problem for an organic brewery using only 19th century technology but, as is so often the case, mother nature has the answer. Natural predators are actively encouraged and as such, spiders are sacred here. Destroying a cobweb or killing a spider here is definitely frowned upon!

Anyway that's enough of a history/science/brewing lesson, not that I pretend to be an expert in any of those fields as I'm sure you can tell if you have read this far! As interesting as the process is, the proof is in the pudding so to speak, and after wandering around the brewery it was time for the best bit; tasting the beer.

The samples we were given were the original Cantillon Gueze, delightfully hazy and with a funky farmyard aroma. It was tart and refreshing, and had more than a hint of dry Somerset cider. We also tried two of the fruit varieties; Kriek (cherry) and Frambois (raspberry). Still tart but with a sweet edge, the raspberry was our favourite. This stuff is the real deal, and beats the more prolific commercially brewed gueuzes (sweetened with syrups and matured for only a few weeks) hands-down. I just wished I'd stashed a few bottles in my bag, but it didn't seem like the most practical beverage to take to a festival!

After a very enjoyable hour or two we made our way out into the pouring rain, to meet our fellow punkers and head to the festival - more can be read about that element of the trip, including our night in Leuven, famous for 'the longest bar in Europe', here!